Everything to know about Grand Canyon National Park

Imagine the Grand Canyon with no people. Just the psychedelic-colored canyon walls, the wind, and the river silent and milk chocolate at the bottom of the gorge.

That’s how it must have looked to the Native Americans who lived in and around the Grand Canyon 12,000 years ago, and to the Spanish explorers who laid eyes on the rift in the 16th century.

There are so many things to do that it might seem impossible to escape the admiring crowds, but we have a few off-the-beaten-path suggestions.

Book Here Your Activities in The Grand Canyon

Cruising the Colorado River in a dory instead of a rubber raft may seem like a stately way to travel, but in reality, it’s a much wilder ride, not very different from how John Wesley Powell and his team first navigated through the Grand Canyon bottom in 1869.

Dories have evolved in design to be nimble and quick to swing around rocks and over rapids, but the boats tend to go through waves rather than over them like a raft would, making for exciting—and wet—adventures. Only a few outfitters are licensed to operate dories on the river.

Trips range from five to 18 days, including all meals and riverside camping throughout the trip, and many books a year or more in advance.

Stargazing in Grand Canyon is a special experience. The clarity of the night skies was recognized in summer 2019 when the park was officially designated as an International Dark Sky Park by the International Dark-Sky Association.

In preparing for the recognition, the Park Service converted thousands of lights across the park to "dark-sky compliant" options. Not only does this afford guests a better view of the heavens above the cliffs, but it benefits wildlife that can be disrupted by artificial light. Every June, visitors can take advantage of star parties, with telescopes set up for free use, plus astronomer talks and photo workshops.

The Shoshone Point turnout doesn’t overlook the canyon—most cars whiz past it on their way to the money shot—but the relatively easy 2.2-mile (3.5-km) trail from the parking lot to the edge is one of the least crowded along the popular South Rim. The view from the end is wonderful: well worth the moderate hike.

Hiking below the rim appeals to very few visitors to Grand Canyon National Park—less than 5 percent venture away from the top.

But there are several spots that lend themselves to a quick dip down into the canyon to experience looking up at the walls, superb examples of the land’s reaction to weather over the millennia. One of them is the South Kaibab Trail.

For those who don’t want to trek the six-plus miles to the canyon floor, Ooa-Aah Point about a third of the way down offers spectacular views.

Toroweap Overlook, the North Rim’s most remote viewpoint of the canyon, is not for the faint of heart but it pretty much guarantees a unique experience. At the edge of the overlook is nothing but air; 3,000 feet down runs the largest rapid on the Colorado River.

Ancient lava flows and black cinder cones invoke a time when volcanic eruptions sculpted the canyon into what we see now. Just getting to the overlook is a challenge; the road is unpaved and studded with rocks that require a high-clearance vehicle to drive. And if you’re looking to stay at Tuweep, the campground at the overlook, you’ll need a backcountry permit and plenty of preparation to stay in this area with no services. 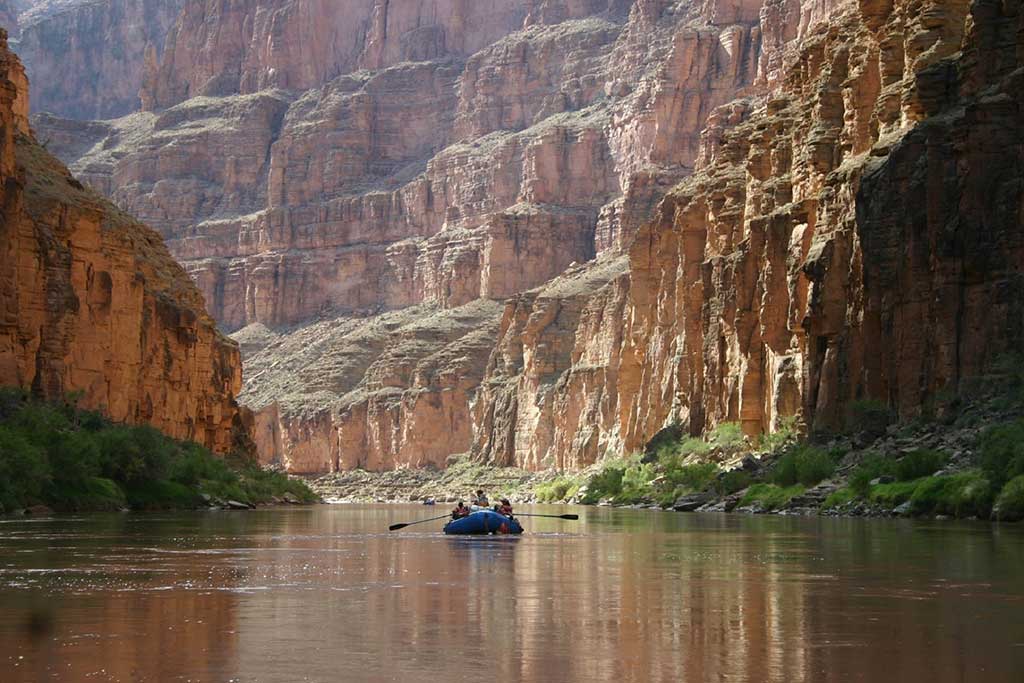 With its exhibits on the park’s natural and human history, Grand Canyon Visitor Center on the South Rim is an excellent starting point. You can leave your vehicle there and walk or take a shuttle bus to other landmarks along the South Rim.

Right behind the visitor center are Mather Point and the 13-mile (20.9-km) Rim Trail to other stunning viewpoints like Yaki Point to the east and Yavapai Point to the west, where a geology museum illuminates nearly two billion years of canyon history.

Beyond Yavapai Point (1.3 miles/2.1 km) is the Village and the eclectic architecture of its historic structures, which together comprise a national historic landmark district.

Many of the buildings were designed by pioneering female architect Mary Colter, including the distinctive Hopi House (1905), an homage to the indigenous architecture of the Southwest that now houses the park’s largest souvenir store and a Native American art gallery.

Verkamp’s Visitor Center (1906) harbors a bookstore, information desk, and exhibits on the canyon’s pioneer history. Among other noteworthy structures are the Kolb Studio (1904) and Lookout Studio (1914), both vintage photo studios that now blend shopping and exhibit space.

The village train station (1910) is the terminus for the historic Grand Canyon Railway, a scenic passenger line that runs 64 miles (102.9 km) through the pine forest and meadows of the Coconino Plateau between the South Rim and Williams, Arizona. Passengers can ride the train as a day trip to the Grand Canyon or combine it with overnights at South Rim lodging.

During the slower winter months, you can drive all the way to Hermits Rest. But during the busy peak season (March 1 to November 30), Hermit Road is closed to private vehicles west of the village.

That leaves hiking and the shuttle bus as the two means to explore this awesome 7-mile (11.3-km) stretch of the South Rim. “Must see” stops along the way include the Abyss with its 3,000-foot (914.4-m) vertical drop-off and Pima Point, where you can see a slice of the milk-chocolate-colored Colorado River far below.

At the end of the road, Hermits Rest is a faux frontier cabin (host to a gift shop and snack bar) fashioned by Colter in 1914.

The shuttle bus and Rim Trail run only as far as Yaki Point; beyond that, a private vehicle is necessary to access various viewpoints along the drive.

Most cars whiz past the Shoshone Point turnout because it doesn’t overlook the canyon, but the relatively easy 2.2-mile (3.5-km) trail from the parking lot to the edge is one of the least crowded along the South Rim, and the view from the end is well worth the trek.

Grand Canyon aficionados debate which overlooks along this stretch is best, from the aptly named Grandview Point to Moran Point with its view of Hance Rapids and Lipan Point, where you can gaze down on that big bend in the Colorado River.

Tucked between the turnoffs is the small but interesting Tusayan Museum with exhibits on local Native American culture. Behind the museum, a short self-guided trail leads to the Tusayan Ruin, the remains of a 12th-century Puebloan village and one of 4,300 archaeological sites so far identified inside the national park.

Inspired by the Puebloan style, Colter fashioned the nearby Desert View Watchtower in 1932 as a perch for an even higher view down into the canyon. Eighty-five steps lead to an observation deck that sits more than 5,000 feet (1,524 m) above the canyon floor, past murals of ancient Native American life rendered by Hopi artist Fred Kabotie. A snack bar, store, and gas station round out Desert View’s amenities.

From Desert View Tower, the drive to the Grand Canyon’s North Rim is nearly 200 miles (321.87 km). But it’s a journey into a different world. For starters, the North Rim averages a thousand feet (304.8 m) higher than its southern counterpart.

That may not seem like a lot, but that extra elevation makes a huge difference in climate, vegetation, and even the animals you come across. The North Rim is slightly cooler in the summer and often inaccessible during winter because of snowstorms. Tourist facilities are open only from May 15 to October 15.

The Visitor Center is a great place to start, especially if you plan on hiking the rim trails or driving the spur roads. Grand Canyon Lodge (1937) balances on the very edge of the chasm, and its back patio offers perhaps the best place in the entire park to sit, stare, and contemplate the geological wonder that spreads out before you.

For an even more vertiginous view, hike the short (0.5-mile/0.8-km) trail to Bright Angel Point.

Scattered around the village are trailheads to paths including the 4.7-mile (7.5-km) Uncle Jim Loop, the 9.6-mile (15.45-km) Widforss Trail to a very secluded overlook, and the 9.8-mile (15.7-km) Ken Patrick Trail all the way over to Point Imperial, the highest point on the North Rim, with views into the canyon’s northeastern corner.

You can also drive to Point Imperial via Cape Royal Road, which switchbacks up onto the Walhalla Plateau and other celebrated panoramas like Vista Encantada and Angels Window. Adventurous drivers can test their mettle on the rough, unpaved road that leads out to Sublime Point, 18 miles (28.9 km) west of the village.

Four-wheel drive and high clearance are essential; a tow strap and saw (for cutting down fallen trees) are highly recommended.

Get the Best Deals on Places to Stay in Grand Canyon

Given the absence of roads, there are only three ways to explore the Grand Canyon below the rims: hiking, mule trips, and river flat trips.

Around 40,000 people a year backpack into the canyon for overnight stays that can vary from one night to several weeks. Far more people are day hikers who venture a short distance down one of three main trails for a taste of what it’s like to stare up at the imposing canyon walls.

Whether on a multi-day trek or an hour-long hike, walkers should always check out trail and weather conditions before plunging down the path. The most timely and accurate information is available from the national park visitor centers or the Backcountry Information Center on the South Rim.

Bright Angel Trail from the South Rim is the safest and best-maintained route into the canyon and includes shade structures, emergency phones, toilets, and taps for refilling water bottles.

With a trailhead just west of the South Rim Village, the Bright Angel dives quickly downward via a series of switchbacks to Indian Garden (4.8 miles/7.7 km) and a suspension bridge over the Colorado River to Bright Angel Campground (9.5 miles/15.3 km) and nearby Phantom Ranch.

The route more or less follows a path that Native Americans and 19th-century prospectors took into the canyon.

The only path into the canyon from the opposite rim is the North Kaibab Trail, a 14-mile (22.5-km) hoof down to Phantom Ranch and the river. Several trails wind through the canyon, including the rugged, multi-day Tonto Trail, which wanders 70 miles (112.65 km) from east to west below the South Rim.

Mule trips into the canyon are offered from both rims. The South Rim features day trips and multi-day pack trips with stops at Phantom Ranch; the North Rim offers only rides.

Other Things to See

Sixteen companies own concessions from the Park Service to run float trips down the Colorado River between Lees Ferry and Diamond Creek.

Did you find this post useful or inspiring? Save THIS PIN to your Travel Destination Board on Pinterest!😊 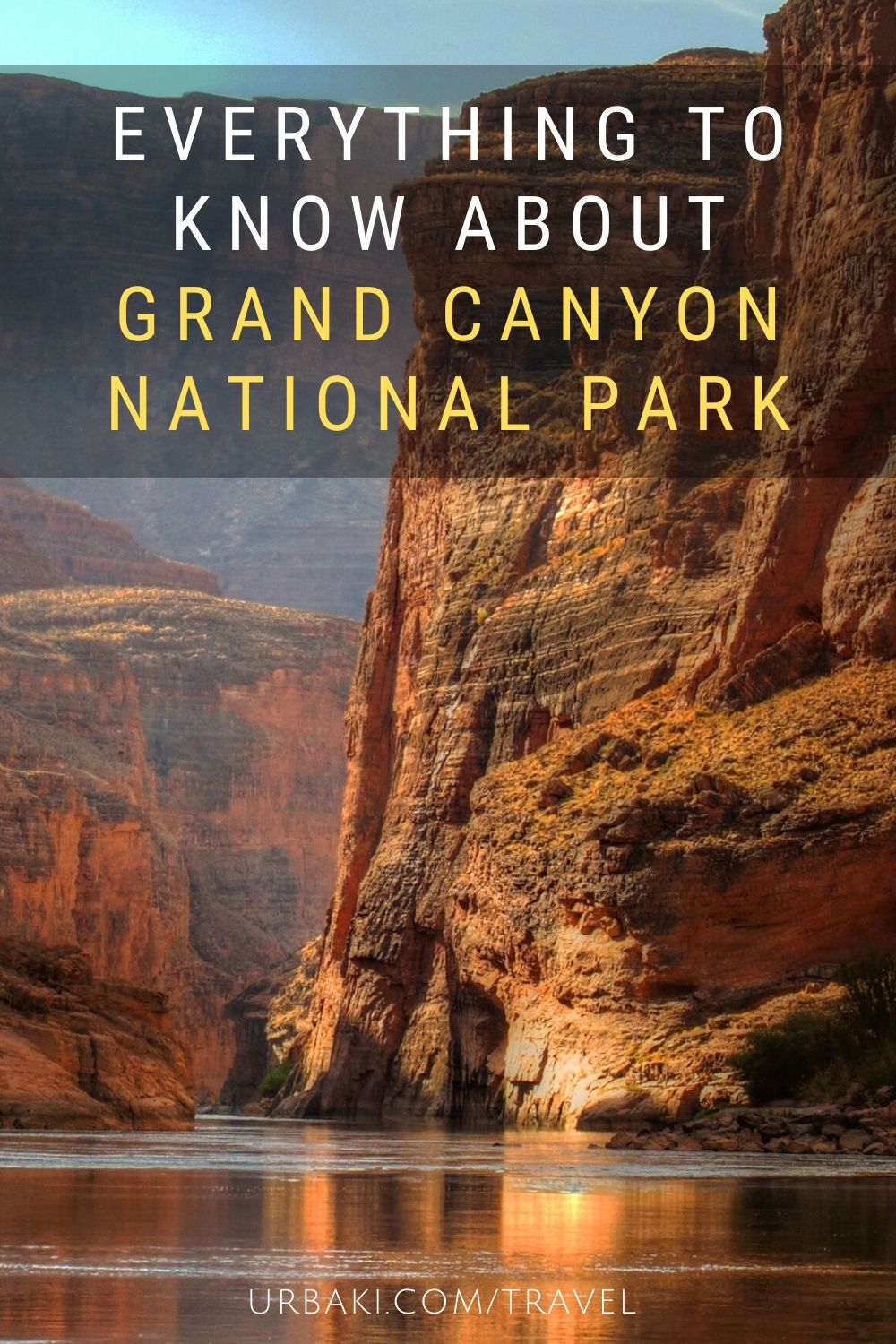 Ok, That is all for now…

We hope you enjoyed

See you in the next post, Have a Wonderful Day!